Chin dimples, also known as butt chins are the result of a Y shaped groove on the mandible. If the two sides of the jaw do not fully fuse together the result is a “groove” created on the chin area of the mandible. This changes how your soft tissue sits over your chin and thus results in a dimple.

First of all, there are many different sizes and shapes of chin dimples, so it really depends on which shape of chin dimple you have. There are chin dimples that form a deep circle while others are a very shallow line.

Chin Dimples are generally regarded as a masculine feature, especially when they form the shape of a deep circle or a deep line. This does not mean that it necessarily makes men more attractive, but rather that it can make women less attractive. The deeper your dimple is, the more it will stand out and be noticeable. On top of that, deeper dimples tend to cause extra chin projection, which again is a masculine trait.

Small dimples in the chin can add some uniqueness to the face, especially on men. Even on women, a small chin dimple is a very mild facial feature and it probably won’t be consciously noticed by most. Small, shallow dimples in the bottom of the chin are perfectly fine, however, dimples that are vertically longer or that are caused by, is where things become problematic. 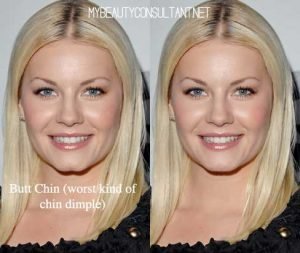 The most unattractive form of chin dimples is a complete butt or apple chin where the dimple occurs at the very bottom of the chin in a W shape.

The higher the dimple is on the chin the harder it is to look good with it. This can become especially problematic if you also have a mentolabial fold which is a fold between your lower lip and your chin. Not only does that combo look bad by itself, but it also draws so much extra attention to the chin and throws off facial harmony.

How to get rid of Chin Dimples

Luckily, if it really bothers you, chin dimples are quite easy to “fix” with plastic surgery. The easiest option for most people would be dermal fillers. This would involve Hyaluronic acid being injected into the dimple which will volumize the area and cover the dimple.

This is actually very common and a large percentage of your favorite celebrities with chin dimples have probably tried to conceal it with fillers at some point in their careers.

How long do chin fillers last

Dermal fillers are a semi-permanent fix in the sense that it will require follow up treatments to refill the Hyaluronic Acid that has been metabolized by your body. There is no guaranteed timeline of how long the filler will last as everyone metabolized the filler at a different rate. For most people, dermal fillers should last between 8-12 months.

Other approaches include chin implants and even shaving the bone to make an even surface. These are all way over the top in my opinion if all you want is to cover a chin dimple. However, if you are getting a chin implant for chin enhancement already, then you should consider if you want to keep or cover of up your dimple.